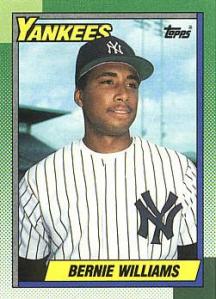 My earliest memories of Bernie were of those watching him play for the Albany-Colonie (NY) Yankees at the now-closed Heritage Park somewhere around 1990.  Back then, Bernie was one of two prospects with the last name of Williams trying to make their way from New York’s double A minor league franchise to the Yankee Stadium outfield and I have to admit, I thought Gerald Williams would win the competition.

But Bernie was a grinder. The only superstar skill he had was using his great speed to get into position to catch just about any fly ball hit his way. In Yankee Stadium’s spacious center field, that was an important skill to have. He was also a switch-hitter. These were probably the two key reasons why Buck Showalter made Bernie his regular center fielder in 1993. From that point on, Bernie simply evolved himself into a great Yankee and became a key cog in the pinstripe teams that won four World Series during the glorious 1996-2000 run.

One of Bernie’s unheralded talents and also his most annoying was the way he would step out of the batter’s box at exactly the precise moment when the opposing pitcher was about to initiate his windup. Nobody did this more effectively than Bernie. Unfortunately, it was also the reason most Yankee games took four hours to complete when Bernie was on the team.

I do regret the fact that the Yankees did not permit Bernie to retire on his own terms. He was pretty much forced off the team when the Yankees decided to go younger in the outfield with Melky Cabrera in 2007. I will always feel that Bernie deserved a Yankee roster spot at the beginning of that season.

Today is also the birthday of this former Yankee reserve catcher , this one too and this 1997 20-game-winning pitcher.