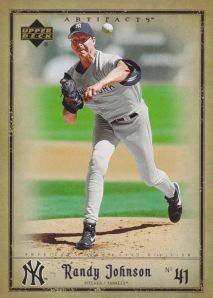 After the Yankees gave up a three-game lead and lost the ALCS to the Red Sox in 2004, New York’s front office made the decision to go and get Randy Johnson from the Diamondbacks. The Big Unit’s former Arizona pitching partner, Curt Schilling had just helped Boston win their first World Championship in almost a century and Brian Cashman decided the Yankees needed to add a dominant number 1 starter to compete with their arch-rivals in the AL East.

Johnson had certainly been a dominant number 1 guy with both Seattle and the Diamondbacks during most of his career, winning five Cy Young’s including four straight with Arizona. But by the time he got to the Bronx, he was already 41-years-old and battling a chronically sore back. He was good enough to win 17 games in each of his two regular seasons in pinstripes, but he pitched poorly in the postseason as the Yankees got bounced from the playoffs in the first round in both 2005 and ’06. Few Yankee fans shed any tears when the often ornery left-hander was traded back to Arizona in January of 2007. Johnson finally retired in 2009 with 303 lifetime victories and 4,135 strikeouts during a 22-year career that got him elected to the Hall of Fame on his first attempt, in 2015.

Johnson’s career in New York got off to a rough start public relations wise when the 6’10” pitcher allegedly shoved a reporter who got too close to him on a Manhattan street. Forty-four years earlier, another Yankee star who celebrates his birthday on this same date had also struggled with his relationship with the very tough Big Apple sports press. You’ll find his PBB post here. This former Yankee utility infielder was also born on September 10th.