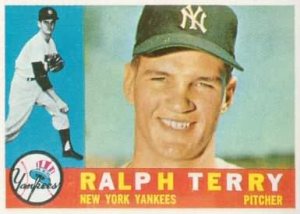 An on-the-field failure by today’s birthday celebrant, actually left me in tears. Yeah, I know Tom Hanks insisted “there’s no crying in baseball” in the movie “A League of Their Own,” but he wasn’t a six year old at the time, watching his beloved Yankees lose the final game of the 1960 World Series.

In fact, the pitch that Ralph Terry threw to to Bill Mazeroski on that October afternoon in Pittsburgh almost fifty years ago, is the first memory I have of being a Yankee fan. When that ball sailed over the ivy-covered left field wall of old Forbes Field, my tears started flowing. I was more livid with Mazeroski than anybody else. How dare this perennial singles hitter get lucky against the world’s greatest baseball dynasty. And my grudge lasted against the Pirate’s longtime second baseman. When the Veteran’s Committee put him into Baseball’s Hall of Fame years later, I distinctly remember cursing the committee. I was pretty upset with Terry too, but it did not take long for my hostile feelings against the tall right-hander to dissipate.

In 1961, Terry went 16-3 for one of the greatest Yankee teams in history as the Bombers reclaimed the World Championship by beating Cincinnati four games to one, in that year’s World Series. Terry was the loser in the one game the Yankees lost to the Reds so he still wasn’t entirely off my list of “players I was angry at.”

But it was 1962 that forever changed the way I felt about Ralph Terry. First off, he won 23 regular season ball games that year. When you’re a Yankee fan, however, you don’t measure players by their regular season performance. Instead it becomes all about the post season. That year, the Yankees faced a very talented San Francisco Giants team, led by Willie Mays, Orlando Cepeda, Willie McCovey, and Juan Marichal.

The series was tied three games apiece. Terry had pitched well in the second game but lost 2-0, his fourth consecutive Series defeat over the past three seasons. He finally broke that skid when he came back to get the win in Game 5 but I’m sure I was feeling pretty nervous when New York Manager, Ralph Houk gave his big righthander the ball to start the seventh and deciding game. Terry pitched brilliantly that day and had held the home team Giants scoreless thru eight innings. In the bottom half of the ninth, with the Yankees leading by just one run, Matty Alou led off with a bunt single. Terry then settled down and struck out Matty’s brother, Felipe and Chuck Hiller. Willie Mays then doubled sending Alou to third with the tying run. The next hitter, Willie McCovey blasted a line drive toward right field. If “Stretch” had hit that ball just a few inches further left or right, Ralph Terry might have officially replaced Bill Mazeroski as my most despised baseball player in history. Fortunately, however, McCovey’s screaming liner was hit directly at Yankee second baseman Bobby Richardson, who after the game admitted he just threw his glove up and luckily snared it. Richardson still claims it was the hardest hit ball he’d ever fielded.

Terry was born in Big Cabin, OK, in 1936. He became a golf pro after his baseball playing days were over and actually competed on the PGA Senior Tour. He shares his January 9th birthday with this former co-owner of the Yankee franchise, this one-time Yankee outfield prospect and this one too.