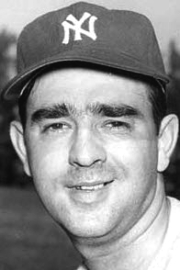 The Yankees have three “Babes” that I know of on their all-time roster. The first and most famous, of course, was Babe Ruth. Then there was Babe Dahlgren, the guy who replaced the legendary Lou Gehrig as the Yankees’ starting first baseman, in 1939. The third Yankee “Babe” was Loren Babe, who’s birthday we celebrate today. Unfortunately for him, he didn’t resemble the original Babe when he was trying to hit big league pitching but if you put a Dodger hat on the guy pictured on the left, you could easily have mistaken him for the great Sandy Koufax.

Loren Babe had the misfortune of being a 24-year-old third base prospect when the Yankees already had a young Gil McDougald and Andy Carey on their big league roster. Born in Pisgah, IA, on January 11, 1928, Mr. Babe got into 17 games as a Yankee during the 1952 and  beginning part of the ’53 seasons. Loren’s bat did play a very significant role in Yankee history. I read Jane Leavy’s book about Mickey Mantle, entitled The Last Boy. It contains the most detailed account I’ve ever read of Mickey’s historic home run off of the Senators’ Chuck Stobbs in Washington’s Griffith Stadium, on April 17, 1953 (See illustrative photo below-not a photo of actual home run.) When Mantle hit that monster he was using a bat he borrowed from a teammate. That teammate was Loren Babe. Nine days later, the Yankees sold Babe to the Athletics but Mickey kept his bat.

That missing bat may or may not help explain why Loren hit just .224 in 103 games for Philly and ended up back in the Minors and eventually, back in the Yankee organization. He then went into managing, scouting and coaching. He was on the Yankees’ big league coaching staff in 1967. He was diagnosed with colon cancer in 1983 while working for the White Sox organization. Needing just eight weeks more of employment to qualify for MLB pension benefits, Chicago put Babe on their coaching staff after Charley Lau, who was serving as the team’s hitting coach, graciously offered to step aside. In a tragic and ironic twist, Lau was also diagnosed with cancer and died just five weeks after the disease took Babe’s life.

Babe shares his birthday with this former Yankee pitcher.