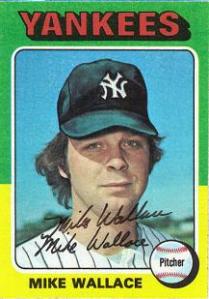 You can’t make this stuff up Yankee fans. The New York Yankees once had a pitcher with the same name as the star correspondent of the 60-Minutes television show, Mike Wallace. Guess what the lifetime record of the pinstriped Mike Wallace was as a Yankee? 6-0!

I actually remember the Yankee Mike Wallace pretty well. That’s because he joined the Yankees from the Phillies during the 1974 regular season. That was the same year New York was making a surprising run at the AL East Division flag under manager, Bill Virdon, despite the fact that Mel Stottlemyre had torn his rotator cuff and his wonderful pitching career was over.

Doc Medich and Pat Dobson both took up the slack caused by Stottlemyre’s absence, when each won 19 games. Dick Tidrow and Rudy May rounded out the surprisingly decent rotation and Sparky “the Count” Lyle, held court in the Yankee bullpen. Wallace joined the team in late June and Virdon used him as his primary left-handed middle reliever the rest of that season. He appeared in 23 games for New York and in addition to the perfect 6-0 record, his ERA was just 2.41.

We all hoped the Gastonia, North Carolina native would be more than just a flash in the pan but that was his fate. After three appearances for the Yankees in 1975, Wallace’s ERA climbed to over thirteen and he was sold to St. Louis. He was out of the big leagues by 1977 and he is now a baseball commentator on the Mid Atlantic Sports network.