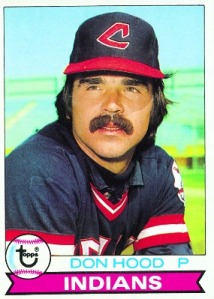 October 16th is a not a great day for notable Yankee birthdays. Neither was 1979 a great year for Yankee baseball. The two-time defending World Champions lost their team captain, the great Thurman Munson in August of that season and missed the postseason for the first time in four years. Munson’s death was not the only reason that Yankee team faltered. In June of that same season, Yankee DH Cliff Johnson got into a brawl with ace closer, Goose Gossage in the Yankee locker room showers. Gossage broke his thumb in the altercation and was out for the rest of the season. Without him, a dominating Yankee bullpen became very ordinary.

The Yankee front-office punished Johnson by quickly trading him to the Indians for today’s birthday celebrant. Don Hood, born on October 16, 1949 in Florence, SC, went 3-1 out of the Yankee bullpen during the remainder of that season. By 1980, he was pitching for the Cardinals.

Another October 16th birthday celebrant with Yankee connections is this former big league catcher who did color and play-by-play for Yankee games for a couple of seasons at the turn of this new century.