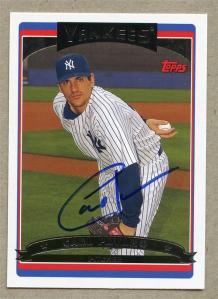 His December, 2004 free agent signing turned out to be one of the worst moves in Yankee front-office history. After paying him $40 million to pitch the next four seasons, the right hander left New York at the conclusion of that contract, having appeared in just 26 games in pinstripes with a 9-8 won-loss record. That equates to more than $1.5 million per start or a bit more than $4 million per victory. Rubbing just a bit more salt in the Yankee’s wounds, Pavano then won 31 times in his first two post Yankee seasons, including a 17-11 record with the Twins in 2010 that had Brian Cashman even considering bringing the guy back to the Bronx in 2011.

That didn’t happen. Pavano ended up signing a new $17 million two-year deal to remain with Minnesota. Turns out Cashman and New York avoided another bad deal.  He was a combined 11-18 for the Twins during the two years covered by that contract and his 2012 season was limited to just 11 starts by a shoulder injury that required surgical repair. Then in January of 2013, Pavano slipped and fell while shoveling the driveway of his home in Vermont and ruptured his spleen. He was contemplating a comeback at the time of that mishap but it looks as if his pitching career is now over.

Pavano was born on this date in 1976. This former Yankee who led New York in RBIs four different times, also celebrates a birthday today as does this one-time Yankee reliever.