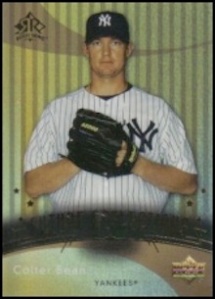 Remember Colter Bean? I do, all six feet, six inches and 250 or so pounds of him. He was a right-handed pitcher from Alabama who went un-drafted after completing his collegiate career in 2000 and was then signed by the Yankees as an amateur free agent that same year.

During the next five seasons, he developed into one of the potential “Mariano Rivera successors” in the Yankee farm system. The problem with that of course was that Rivera was like the Energizer Bunny, he just kept going and going and going and didn’t require any successoring.

So Bean kept pitching well out of the pen for Yankee farm teams, putting together a 38-20 record with 16 saves, while getting three brief trials with the parent club. Unfortunately for Bean, he didn’t impress anyone in any of them and ended up getting released by New York in 2007, when he was already 30-years-old.

The Braves signed him and a year later, so did the Rays, but he would never again pitch in a big league game. Too bad, because I thought Colter Bean had one of the coolest names in Yankee franchise history. Its a name you can’t forget. I never have.

He shares his January 16th birthday with this bird-flipping former Yankee pitcher, this one-time Yankee first-baseman and DH and this former Yankee reliever.