Ban Johnson, the first-ever American League President did not like John McGraw, who was then the manager of the new league’s Baltimore franchise. McGraw was famous for fighting with umpires and flouting the rules. The fact that the fiery skipper also had an ownership stake in the Orioles’ franchise meant that he was technically one of the AL chief executive’s  bosses, which also drove Johnson nuts. So during the 1902 season, Johnson put together a reason to put McGraw on indefinite suspension. Instead of fighting it or serving it out, McGraw jumped to the rival National League and accepted a managerial position with the New York Giants. When he did, he invited a core group of his favorite Orioles players to accompany him to his new team. That is why both McGraw and today’s Pinstripe Birthday celebrant were already in the Big Apple when one season later, the Orioles’ franchise was also relocated there and became the Highlanders (and eventually the Yankees.) If Johnson and McGraw did not dislike each other so much both the manager and Roger Bresnahan would have become Highlanders instead of Giants and the Yankee franchise would surly have won its first Pennants and World Series much earlier in team history. Eventually, baseball’s most famous catcher during the first decade of the 20th century would one day join his buddy and skipper in Baseball’s Hall of Fame.

Bresnahan was a versatile athlete and a very interesting character. He was famous for his hair-trigger temper. Nobody got ejected from baseball games for fighting with umpires and opposing players more frequently than Bresnahan did and it was often necessary to call in the local police to escort the Toledo, Ohio native off the field. He was also not your prototypical catcher. He had outstanding speed, stealing 212 bases during his big league career. He was a second-string receiver for McGraw in Baltimore but when he joined the Giants they already had two catchers so Lil Napoleon started his buddy in center during his first full season in New York and he hit .350. Bresnahan had started his big league career as a pitcher and went 4-0 doing his 1897 rookie season with Washington. He actually played all nine positions during his career. This guy was also quite the innovator. It was Bresnahan who introduced shin guards to the catching position and he also wore baseball’s first-ever batting helmet.

Roger no doubt owed much of his big league success to Giant Hall of Fame pitcher Christy Matthewson. It was Matthewson who went to McGraw and told him he preferred to have Bresnahan catch his games. In 1905, the two would lead the Giants to their second straight NL Pennant and first ever World Series title. In that Fall Classic, Matthewson would throw three complete game shutouts with Bresnahan behind the plate in each of them. In addition, the Giants’ starting catcher also led New York with a .313 batting average during that Series.

Bresnahan would continue catching for the Giants until 1909, when he was offered the opportunity to become a player-manager for the Cardinals. Not wanting to stand in his friend’s way, McGraw let him go. Bresnahan would spend four years catching and managing for the Cardinals and later hold the same position with the Cubs.  He retired in 1915, after playing 15 Major League seasons and would one day buy a minor league franchise in Toledo. He was voted into Cooperstown by the Old Timer’s Committee in 1945, one year after he had died of a heart attack in Toledo, at the age of 65.

One of the all-time great catchers in baseball history, Dickey was superb both at the plate and behind it. He hit .300 in ten of his first eleven seasons as the starting Yankee receiver and drove in over 100 runs in a season four times during his Hall of Fame career. This eleven-time All-Star played in eight World Series with New York, winning seven rings in the process. Dickey’s prime was the four-year-period from 1936 through 1939, during which he averaged 26 home runs, and 115 RBIs with a batting average of .326. He entered Military service in 1943, returning to the team in 1946. When Yankee skipper, Joe McCarthy fell ill and resigned, the team made Dickey the player-manager for the balance of the ’46 season. After leading New York to a 57-48 finish that year, he ended both his big league playing and managing career. He then accepted the Yankee’s offer to manage their Minor League team in Dickey’s hometown of Little, Rock Arkansas. After one season there, he was back in the Bronx to begin a decade long career as a Yankee coach. His Hall-of-Fame Yankee successor at catcher, Yogi Berra credits Dickey for teaching him how to play the position.

Dickey was a quiet hard-working professional, much like his close friend and roommate, Lou Gehrig. He played hard on the field and behaved himself off of it. His playing career lasted 17 seasons. The Yankees retired his uniform number 8 (shared with Berra) and a plaque in his honor now rests in the Monument Park of the new Yankee Stadium. It certainly belongs there.

Dickey shares his birthday with this one-time Yankee prospect.

Dickey’s record as a Yankee player:

Dickey’s record as a Yankee manager: 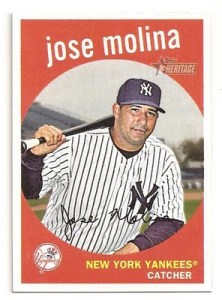 Former Yankee catcher, Jose Molina was born on this day in 1975, in Bayamon Puerto Rico. He became Jorge Posada’s backup receiver on July 21, 2007 when the Yankees acquired him from the Angels for a Minor League pitcher named Jeff Kennard. In what I always thought had been a cool arrangement, up until that deal was made Jose had been sharing the Angels’ catching position with his younger brother Bengie. He also has another brother with the absolute best first name in baseball (Yadier; pronounced yah-dee-yay), who has been a very good starting catcher for the Cardinals since 2005. Together, the catching Molina brothers have collected five World Series rings during the past decade. Both Bengie and Yadier are better hitters than their older brother and have each won multiple Gold Gloves. Jose’s inability to hit right-handed pitching usually prevents him from taking over a team’s starting catcher role but his arm and his abilities behind the plate are every bit as good if not better than his younger brothers.

The Yankees had been using Will Nieves as Posada’s backup during the first half of that 2007 season, but he was only hitting .164. When Molina took over that role he became an instant hit with Yankee fans, impressing us with defensive skills that were superior to Posada’s and also hitting a surprisingly robust .318 during his first half-year playing in the Bronx. In fact, it wasn’t till Molina put on the pinstripes and I got to watch him semi-regularly that I really began noticing Posada’s weaknesses behind the plate. I will never forget the evening Molina left me stunned with my mouth open staring at my big screen after he threw a would-be base-stealer out at second from his knees.

His play impressed the Yankee brass too. New York signed him to a two-year-$4 million deal to play for them in 2008 and’ ’09. When Posada was injured in ’08, Molina got the opportunity to start. Unfortunately, by then he had stopped hitting and the Yankees eventually felt forced to go out and get Ivan Rodriguez in a failed effort to put some more offense into their lineup. The move didn’t help New York, as the team missed postseason play for the first time since 1993 but I-Rods inability to hit did help convince the Yankee front-office to keep Molina as Posada’s backup the following year. Jose did get the opportunity to engrave his name in Yankee lore that season. On September 21, 2008 in the bottom of the fourth inning in a game against Baltimore, Jose hit a 2-0 pitch off the then Orioles Chris Waters deep into the left field stands for a two run home run. That blast would turn out to be the very last home run ever hit in the original Yankee Stadium.

In 2009, A.J. Burnett became a Yankee and Molina pretty quickly became Burnett’s personal catcher. Jose helped guide the whacky right-hander to what would turn out to be his best season in pinstripes, helping New York capture their 27th World Championship. But Molina’s bat continued to fail him as he hit just .217 during the ’09 regular season. The Yankees chose not to re-sign him when his contract expired and rookie Francisco Cervelli took over the back-up catcher’s role in 2010.

Molina shares his birthday with this Yankee DH.

Pinstripe Birthdays
Create a free website or blog at WordPress.com.