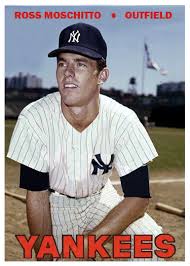 “Ross Moschitto” is the name most often mentioned by lukewarm Yankee fans who are my age, when they are trying to convince someone else how big a Yankee fan they are. I’m not sure why but that’s just the way it is. They don’t mention Frank Tepedino or Steve Whitaker or Roger Repoz. Its always Moschitto. He has to be the most famous non-famous Yankee in pinstripe history.

In 1965, Major League baseball started its free agent draft along with the rule that any player in the Majors or Minor leagues could be drafted if that player’s name was not on a Major League club’s 40-man expanded roster at the time the draft was conducted. For years, the Yankees had dominated their league by signing up all the best amateur prospects and developing their talent in New York’s well financed and well managed minor league farm system. No other team could steal a prospect from another franchise and since the Yankees had the most money they consistently had the most prospects.The draft and the 40-man roster rule changed that forever and Ross Moschitto paid the price for those changes.

He had signed with New York in 1964 and was assigned to their lowest level minor league team, in Johnson City, TN. When Ross hit 20 home runs in just 71 games that year, he popped onto the radar of every big league franchise. Instead of practicing their usual prospect patience, the Yankees put Moschitto on their big league roster the following April, when he was far from ready. So instead of getting a chance to play every day, Ross spent the the 1965 season sitting on a big league bench, pinch running for Mickey Mantle if the aging slugger got on base in his last at bat or taking his spot in the outfield if the Mick made an out. He got just 27 big league at bats that year and when he was sent back to the Minors the following season, he had lost his stroke for good. Today’s Pinstripe Birthday Blog celebrant was born in Fresno, CA in 1945. 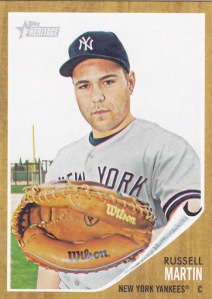 Unless they had another move to acquire a catcher in mind before Opening Day of the 2013 regular season, the Yankees made a mistake by not re-signing Russell Martin. Instead, they allowed their starting catcher for the 2011 and ’12 seasons to make a new two-year $15 million deal for himself with Pittsburgh. I realize this native Canadian had a very bad offensive season in 2012, but his game management skills and defense remained steady and he did pound 21 home runs. None of the trio of receivers who will battle to take over Martin’s job in 2013 will be as good as he was for New York.

My single biggest concern about the former Dodger catcher when the Yankees signed him before the 2011 season was his health. He had hurt his hip during the 2010 season and the injury required surgery. But Martin had worked like crazy to recuperate from that operation and was able to catch 253 games during his two years in the Big Apple. His pinstripe career got off to a great start during the first half of 2011 and he made the AL All Star team. But his offense then pretty much abandoned him until he finally started hitting again during the final month of the 2012 season. Fortunately, he never let those hitting woes impact his solid work behind the plate. I loved the fact that he had the confidence and catching ability necessary to have Yankee pitchers throw their nastiest curves and sliders when hitters were ahead in the count or with opposing runners on base. When Martin was on a roll, be could block short pitches and dig them out of the dirt as well as any catcher I’ve seen. I also liked the fact that Martin had some pop in his bat (39 home runs in his two seasons with New York) and some speed in his legs. He’s stolen 80 bases during his seven years in the big leagues. Plus the guy turns just 30-years-old today.

I think Pittsburgh got themselves one of the ten best catchers in baseball for their 2013 lineup. Meanwhile, neither Chris Stewart or Francisco Cervelli have really proven they’ve got the all-around skills to handle the role of a big league team’s starting catcher. A still developing Austin Romine hasn’t either. That means the Yanks go into a new season with a big question mark at one of baseball’s most important positions, when for $15 million over the next two seasons they could have had one of the better catchers in baseball in that slot. Brian Cashman has said the organization is just biding time, waiting for 19-year-old Gary Sanchez, the franchise’s number 1 catching prospect to be ready for the big show. But that’s at least two years and two postseasons away. Having Martin behind the plate until that happened was a wise and affordable option.

This former Yankee outfielder  and this one-time Yankee starting pitcher both also celebrate their birthday on February 15th. 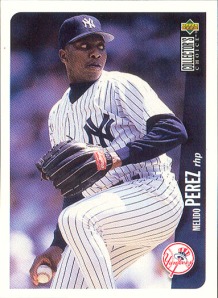 Buck Showalter inherited a pretty bad team when he took over the Yankee’s managerial responsibilities from Stump Merrill after the 1991 season. The Yankees had a mediocre lineup and an even worse starting pitching rotation. In January of ’92, the team made a move to try and shore up that rotation. They sent second baseman Steve Sax to the White Sox in return for Melido Perez and two additional pitching prospects. Perez had been in the big leagues since 1987 when he came up with the Royals. He had spent the previous four seasons starting for the White Sox and compiling a 44-45 record. He was about to become the second Perez brother to pitch in pinstripes. His older brother Pascual had put together some good seasons on the mound with both the Braves and Expos but had pitched sparingly and ineffectively for New York in both 1990 and ’91. A third brother, Carlos would later become a starter for the Expos in 1995.

With the Yankees, Melido would become part of a starting rotation that included the veterans Scott Sanderson and Tim Leary along with Scott Kamieniecki. Having just completed the dark ages of the Merrill era, I remember that going into that season I did not expect any of them to pitch very well. The only one who did was Perez. He didn’t just pitch well, at times he was downright dominating. He gave the Yankees 33 starts and a career high 247-plus innings. He struck out 218 hitters and compiled an ERA of just 2.87. He finished with a 13-16 record but he could have easily won 20 games. In ten of his losses the opposition scored three runs or less. He pitched three more seasons for Showalter and the Yankees but never again really came close to the brilliance he exhibited during that 1992 season. Fortunately, the Yankees were gathering new arms to staff their rotation and were able to become winners again without too much help from Perez.