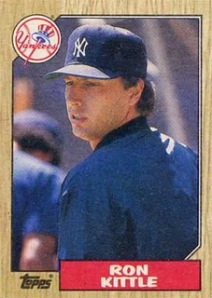 I remember being somewhat excited by the news that the Yankees had acquired Kittle in a trade with the White Sox, after the 1986 All Star break. He had been named AL Rookie of the Year just three seasons earlier, when he belted 35 home runs and drove in 100 for Chicago. Even though he was a right-handed hitter who would not be able to take advantage of Yankee Stadium’s short right field porch, the guy had impressive power and I thought he’d make a decent contribution if then Yankee Manager, Lou Piniella could find a place to play him. That turned out to be the problem. Piniella had too many DHs and outfielders on his roster already and he couldn’t give Kittle the volume of at bats streaky hitters like him needed to get hot. What the Yankees really needed back then was starting pitchers. I still can’t believe a Yankee lineup that featured Dave Winfield, Ricky Henderson and Donnie Baseball, all in their primes, never made it to the postseason. Ron did play the entire 1987 season with New York, getting in 59 games and hitting 12 home runs but the Yankees ended up releasing him after that season. Kittle was born in Gary, Indiana on January 5, 1958.

He shares his January 5th birthday with this former Bronx born Yankee outfielder and this legendary Yankee third base coach. 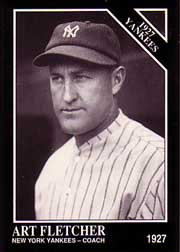 I’m writing this post about a month before pitchers and catchers will be reporting to Tampa for the start of the Yankees’ 2013 spring training camp. You’d think at this time of year the only number New York’s front office would be concerned with would be “28,” because that’s the number of World Championships the franchise would have if they can get to and win the 2013 World Series. But instead of “28,” Yankee fans have been reading a whole lot about the number “189,” as in $189,000,000, the amount of money Major League Baseball has established as each team’s salary cap for the 2014 season. If the Yanks can get their payroll down to that level, the team will save millions in penalties. The question is however, can a team that has always spent its way to the top of the standings get there on a reduced budget?

Money has not been the object in Yankee Universe since two filthy-rich Colonels, Rupert and Huston, purchased the franchise in 1915. They immediately began spending their way to the top of the AL standings by looking for, trading for and paying for the best talent money could buy. And it wasn’t just talented proven big league players they coveted, they wanted the best minor league prospects, the best managers and yes even the best coaches. Which brings me finally to today’s Pinstripe Birthday Celebrant.

Art Fletcher had been the outstanding starting shortstop for the New York Giants, during most of that team’s John McGraw-led golden era, from 1909 until 1920. He was a scrappy, singles-hitting, .277 lifetime hitter who knew every trick in the book when it came to winning a baseball game. McGraw traded him to the Phillies in the middle of the 1920 season when Fletcher was 35-years-old. Two years later, he was made manager of that team and he remained in that job for four seasons. In 1926, Miller Huggins approached him with a job offer to become a coach for the Yankees. Fletcher had figured out he was too high strung and aggressive to enjoy the manager’s role, especially for a losing team like the Phillies, so he accepted Hug’s offer. He remained on the New York staff until he suffered a heart attack during the 1945 season and was forced to retire.

During his nineteen seasons in pinstripes, Fletcher became a legend in the coaching box. He was a master at learning and playing the strengths of each Yankee player against the specific weaknesses of each of their opponents. Huggins loved the guy and when the diminutive Yankee skipper died tragically during the 1929 season, it was Fletcher the Yankees turned to as his interim replacement. During his tenure in New York, Fletcher turned down numerous offers to manage other teams and the Yankees made it worth his while to stay in pinstripes. His annual salary rose to $10,000, an unheard of sum for a coach at the time.

Fletcher willingly returned to a coaching role when the Yankees hired Bob Shawkey to manage the club in 1930. But when Shawkey’s team failed to win the Pennant that year, Rupert hired the former Cubs’ skipper, Joe McCarthy to take his place. Since there had been bad blood between McCarthy and Fletcher dating back to the time when they were opposing managers in the senior circuit, the rumor mill was rampant that Marse Joe would fire the coach when he took control of his new team. That didn’t happen. McCarthy recognized Fletcher’s sky-high baseball IQ and the two worked brilliantly together. So brilliantly in fact that by the end of Fletcher’s career with New York, he had cashed $75,000 worth of World Series checks. (The Yankees won ten AL Pennants and nine World Series during Fletcher’s Yankee coaching career.)

Fletcher shares his January 5th birthday with this former AL Rookie of the Year and this former Bronx-born Yankee outfielder. 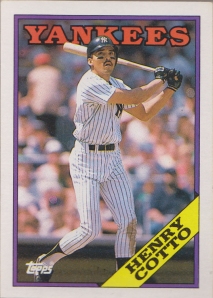 You need to be a pretty good and long time Yankee fan to remember today’s featured player. The 1985 and ’86 Yankees would have been the AL Wildcard playoff team if that postseason format was in play back then. The 1987 squad finished fourth in the super-tough AL East but would have won the West Division crown with their 89 victories. These were good Yankee teams, with offenses anchored by Don Mattingly, Dave Winfield and before he was traded, Ricky Henderson. Today’s Pinstripe Birthday celebrant was a Bronx born outfielder who hoped to join Winfield and Henderson as a starter in the Yankee outfield.

That didn’t happen. Cotto first came to New York in a December 1984 trade with the Cubs.The Yankees got him, catcher Ron Hassey, pitcher Rich Bordi and Porfi Altamirano (that last guy’s name is not misspelled) for pitcher Ray Fontenot and outfielder Brian Dayett. In 1985, Ken Griffey started in left for New York while Cotto, when he was not down in Columbus, hit .304 during his first season in pinstripes, appearing in 34 games. He was supposed to compete for the job the following year but Cotto’s back and forth trips to Columbus continued as Dan Pasqua ended up starting. In 1987, Cotto saw his most action in pinstripes, playing in 68 games, hitting five home runs and driving in 21. But he hit just .235 with a putrid .OBP of just .269 as Gary Ward took over in left for New York.

Cotto had had his three strikes in Yankee Stadium and he was out, when in December of 87, the Yanks traded him and pitcher Steve Trout to Seattle for pitchers Lee Guettermann, Clay Parker and Wade Taylor. That deal turned out to be a Godsend for Henry because the Yankees evolved into a horrible team over the next few seasons and Cotto finally got a chance to start in a big league outfield as a Mariner. He played the next five and a half years in Seattle, until 1993. Though he was never more than an average player, his big league career lasted a decade. He ended up with a .261 lifetime average and 44 big league home runs. He played in Japan in 1994 and then ended up back with Seattle, coaching in the Mariner’s organization.

Cotto shares his January 5th birthday with this 1983 winner of the AL Rookie of the Year Award and this legendary Yankee third base coach.