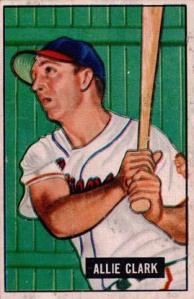 This Jersey native started his seven-season big league career appearing in 24 games with the 1947 Yankees. Most of those appearances were as a first baseman. He was one of the last Yankees to wear uniform number 3 before it was retired upon Babe Ruth’s death in 1948. The highlight of Clarke’s short stay in pinstripes had to be his participation in the 1947 World Series. He appeared in three games against the Dodgers in that Fall Classic, came to the plate three times, getting a walk a base hit, scoring a run and delivering an RBI. He was then traded to the Indians for pitcher Red Embree and appeared in his second straight Series that year, when the Indians captured the AL Pennant. He played three plus seasons in Cleveland and then joined the A’s in Philadelphia for a while. He played his last big league game in 1953.

Clarke played briefly for the Amsterdam Rugmakers in 1941. The team was based in my hometown of Amsterdam, NY and was the Yankees’ C-level affiliate in the old Canadian-American League. He wowed our town’s local sports press by averaging .368 during his 20 games with the team.

He shares his June 16th birthday with this former Yankee reliever and this one too. 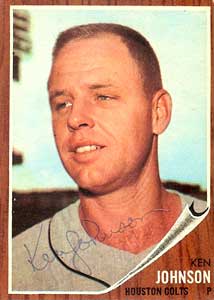 When I first started following the Yankees back in 1960, Major League Baseball was still in the two-league, sixteen-team format that it had been in since 1901. To finish last in an American or National League Pennant race had always meant your team had ended up in eighth place. By 1962 however, both the AL and then the NL had expanded to ten teams and suddenly finishing eighth no longer sounded as forlornly horrible as it had for big league franchises since the turn of the twentieth century. In fact, your team could actually finish ninth and still not be considered the worst team in the league.

The Yankees of course had developed a reputation for finishing in first place but in 1962, their new crosstown rivals, the Mets would begin battling their NL expansion brothers, the Houston Colt 45’s for ninth place bragging rights in the senior circuit. Neither team finished ninth in their 1962 inaugural seasons because Houston was able to surpass a woeful Chicago Cubs team that year and finish in eighth. But for the next four seasons, it was baseball’s first-ever-team based in Texas that won the NL race for ninth place over the Amazin’s and the reason was Houston had much better starting pitching than the Mets.

Today’s Pinstripe Birthday Celebrant was in the original starting rotation of that Houston expansion team. He joined Turk Farrell and Bob Bruce to give the Colt 45’s a solid trio of starters that made it tough to sweep a series against the early versions of this ball club. That 1962 Houston pitching staff had a 3.83 cumulative ERA (the Mets first year ERA was 5.04.)

Ken Johnson was the ace of that first Houston pitching staff. The native of West Palm Beach, FL had made his big league debut with the Kansas City A’s in 1958 and spent his first three years struggling to establish himself with that very bad A’s team. He ended up in Toronto in 1961, picking for an unaffiliated minor league team in the American Association, when he caught the eye of the Reds, who were at the time in the thick of the NL Pennant race. He joined the Cincinnati starting rotation and finished 6-2 for that NL Championship club. He actually got to pitch two-thirds of an inning of scoreless relief against the Yankees in the ’61 Series. Johnson thought he had found a home but the Cincinnati front office left him unprotected in the NL expansion draft and he became Houston’s 29th pick.

His four-year record with the Colt 45’s was 32-51 but his ERA while there was a very respectable 3.41. The Milwaukee Braves, in search of starting pitching during the 1965 season, acquired Johnson for Lee Maye. With a solid offense finally supporting him, the six foot four inch right hander went 40-25 during his first three seasons with the Braves. He slumped to 5-8 during his fourth year with the team and by 1969 he was 35-years-old.

The Yankees happened to be looking for a right-hander they could add to Ralph Houk’s bullpen and Johnson’s name came up. The Braves sold him to New York on June 10, 1969. He made his pinstriped debut one day after his 36th birthday, pitching two scoreless innings against the Tigers in relief of Mike Kekich. Four days later, Houk inserted him in the tenth inning of a game against the Red Sox and he got shelled and took the loss. It took him a couple of weeks to get used to his new surroundings but by July he had settled down and allowed just one earned run in his six appearances that month. Just as he was getting comfortable working in the Bronx however, Johnson was sold to the Cubs on August 11th.

Johnson’s most famous moment as a big leaguer took place on April 24, 1963, when he became the first MLB pitcher in history to toss and lose a nine-inning no-hitter. In the ninth inning of that Houston-Cincinnati Reds game, Pete Rose tried to break up the hitless performance by bunting for a hit. Johnson fielded the ball cleanly and quickly but his throw to first was wild and Rose advanced to second on the pitcher’s error. After Rose was sacrificed to third, he scored when Houston second baseman, Nellie Fox booted a ground ball and when his team couldn’t score in the bottom of the ninth, Johnson lost the game 1-0. 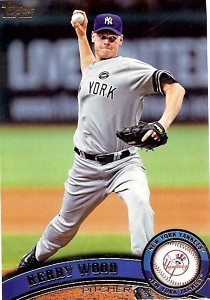 It did not take long after the Yankees picked up Kerry Wood from the Indians in July of 2010 for me to become a fan of the 1998 NL Rookie of the Year. The big right-hander pitched lights out baseball during the final two months of that season, permitting just two earned runs in the 26 innings he pitched wearing pinstripes. His stuff was electric during that spell and the only weakness he exhibited during his short stay in New York was a tendency to encounter streaks of wildness. I was really hoping the Yankees would sign him to a new contract. He was coming off a huge $20 million two year deal he had signed with the Indians so I could understand the Yankees reluctance to get into a bidding war for a 13-year veteran with a history of DL stays. That’s why I was shocked when Wood signed with the Cubs for just $1.5 million that December and even more shocked when New York then paid Rafael Soriano $35 million over three years to basically replace Wood as the Yankee’s eighth inning bridge to Mo Rivera. According to press reports I read at the time, Wood made the decision to return to the Windy City and the big league team he started with after attending the funeral of Cub great, Ron Santo. He is revered in Chicago and he keeps his family home there. Wood pitched well for a very bad Cubs’ team last season, but recurring blistering problems on his pitching hand prevented him from displaying the type of dominance he had shown in pinstripes. He tried to play again this season but after nine appearances he told the Cubs front office he was through. He then made one final ceremonial appearance against the cross town White Sox a few days later and ended his big league career by striking out Dayan Viciedo on three straight pitches.

Wood was born on July 16, 1977 in Irving, TX. This other former Yankee reliever and this former Yankee right fielder were also born on today’s date .