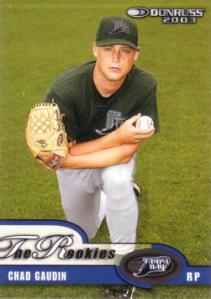 Talk about a lousy birthday present, New York announced they were releasing this right-hander on his 27th birthday. He had been competing in Spring Training for the fifth starter’s spot in Manager Joe Girardi’s 2010 rotation but was beaten out by Phil Hughes. If the Yankees kept him on the roster and put him in the bullpen, they would have had to pay his full $2.7 million salary so they released him instead. Gaudin landed a job on the A’s staff a few days later but when Oakland released him in May of 2010, he again joined the Yankee bullpen. He originally had impressed me during his first 11 appearances in pinstripes in 2009 but he did little for New York upon his return in 2010. He pitched a bit for the Washington Nationals in 2011 and then caught on with the Marlins in 2012, followed up by a strong season out of the Giants’ bullpen in 2013. The Phillies brought him to their 2014 spring training camp but he was cut from their roster early on.

If first impressions meant everything, Ernie Shore would have never pitched a second big league game and he almost didn’t. Shore was a North Carolina farm boy who hated working his Daddy’s fields so he took the opportunity to attend college and become a mechanical engineer. The school, Guilford College, had a baseball team and Shore became that team’s ace pitcher, winning a total of 38 games during his collegiate career. He was a tall six foot four inch right-hander, who was thin as a rail but he could evidently generate lots of arm speed from that frame because he was known for his fastball.

His success in college got him noticed by the great John McGraw, who sent Shore a ticket to come to New York and pitch for the Giants. McGraw inserted his skinny rookie into a game against the Boston Braves in which the Giants had a 19-run lead. When the kid was finished pitching, that lead had shrunk to nine and he never pitched another inning for a McGraw managed team.

A year later, Shore was pitching for the International League’s Baltimore Orioles, where he was part of the same rotation as a young and promising southpaw named George Ruth. That July, the Boston Red Sox purchased the dynamic duo. It was Shore, who at that time was 23-years-old and 4-years-older than Ruth, who would make the bigger immediate impact on the Boston pitching staff. He went 10-5 during the second half of the 1914 season, while the nineteen-year-old Babe was just 2-1. The following season, Ruth won 19 and Shore won 18 leading the Red Sox to the AL Pennant. But it was again the older more mature Shore that Boston turned to in the 1915 World Series against the Phillies. Ernie got two starts in that Fall Classic and Ruth none, as Boston captured the Fall Classic in five games.

The following year, Ruth won 23 and Shore 16, helping the Red Sox defend their AL title. Shore then won two games in Boston’s five game victory over Brooklyn in the 1916 World Series, while Babe got one of the other two wins.

The Red Sox did not get back to the Series the following year. Ruth won 23 games in 1917 and Shore went 13-10. But in July of that 1917 season, another episode involving the two pitchers once again exemplified the quiet confident nature of Shore versus the much more undisciplined personality of the younger cruder Ruth. Babe had started a game against the Senators and after walking the first hitter on four straight pitches, became so irate at the umpire he actually punched the guy. Shore was inserted to the game and on his first pitch, the runner on first was thrown out trying to steal. Ernie then retired the next 26 hitters he faced, recording one of the most famous two-man no-hitters in baseball history.

That 1917 season was Shore’s last year in Boston. The following season, with the US fully engaged in WWI, he enlisted in the US Navy. When he returned to the game in 1919, it was as a member of the New York Yankees. He had been sold to the Yanks by the Red Sox with teammates Dutch Leonard and Duffy Lewis, the previous December. Unfortunately for both Shore and the Yankees, he caught a very bad case of the mumps at the team’s 1919 spring training camp and blamed the disease for disrupting his training regimen and spoiling his entire season. He would go only 5-8 during his first year in New York.

In January of 1920, the Yankees reunited Ruth and Shore when they purchased Babe’s contract from Boston. The Bambino definitely generated more excitement in the New York sports press that winter but there was still plenty of buzz about how a now-healthy Shore would once again be blazing his fastball by AL hitters.

Turns out, that case of the Mumps was simply hiding the real reason Shore didn’t pitch well in 1919. His right arm was dead. No one was sure how or when it happened but in 1920, it became very clear that Ernie had lost his trademark fastball. He appeared in just 14 games for manager Miller Huggins’ team that year, making just 5 starts and finishing with a 2-2 victory and an ERA of  4.87 runs.

After attempting to pitch his way back to the big leagues via the Pacific Coast League in 1921, Shore retired back to his native North Carolina, where he eventually became a well-known sheriff for Forsyth County.

Most of the information for this post was derived from this excellent article about Shore published by SABR. He shares his March 24th birthday with this former Yankee first baseman, this former starting pitcher and this former reliever.

Having seven bonafide candidates for the five spots in the Yankees’ 2012 starting rotation is certainly one of Joe Gerardi’s spring training dilemmas this year. But it pales in comparison to the crowd of first basemen Casey Stengel dealt with back in 1949. Stengel, however, loved platooning his ballplayers and he had a veritable ball with that particular Yankee team. To begin with, Joe DiMaggio was disabled with a sore heel that year, so Stengel shuffled his three outfield spots among Hank Bauer, Johnny Lindell, Gene Woodling and Cliff Mapes. At third base, he had the good fielding Billy “the Bull” Johnson and the good hitting but horrible fielding future doctor, Bobby Brown. His two alternatives at second were Snuffy Stirnweiss and Jerry Coleman. But it was at first that the Ol Perfessor had a real logjam. The veteran ex-outfielder, Tommy Henrich was considered the starter but he was joined by fellow first-sackers, Jack Phillips, Fenton Mole, Joe Collins and today’s Pinstripe Birthday Celebrant, Dick Kryhoski.

I know that baseball fans in my hometown of Amsterdam New York were rooting for Kryhoski to make Stengel’s cut. That’s because he had spent part of his first year in the Yankee organization playing for the Amsterdam Rugmakers, New York’s old Class C affiliate in the Canadian American League. Not only did the Livonia, NJ native make the parent club that spring, he also returned to Amsterdam when the Yankees squared off against the Rugmakers in an exhibition and thrilled the crowd with a home run that day.

As the season began, Stengel inserted Kryhoski at first quite a bit to give the then-36-year-old Henrich a breather. Though both he and Henrich batted from the left side, Stengel played him almost exclusively against right-handed pitching. If you played first base for the Yankees and swung from the left side, you better have been able to pull the ball into the old Stadium’s short right field porch. Kryhoski’s inability to do so frustrated Casey and even though the kid had his batting average up over .300, it did not prevent Casey from looking for a better alternative among the aforementioned group of first-sackers already in the Yankee organization. When none of them caught fire, the Yankees went out and purchased “the Big Cat,” Johnny Mize from the cross-town Giants and Kryhoski’s days in Pinstripes were effectively over. He did hit .291 during his rookie season. That December, he was traded to the Tigers. He ended up playing two seasons in Detroit, three seasons for the Browns/Orioles and one more with the A’s. He retired in 1955, with a .265 career average in 569 big league games. He passed away in 2007 at the age of 82.

Kryhoski shares his March 24th birthday with this three-team-teammate of Babe Ruth, this former Yankee reliever and this one-time Yankee starting pitcher.

Yankee GM, Brian Cashman recently admitted he’s had his heart broken by glowing spring training assessments of past Yankee bullpens that ended up going bad during the regular seasons that followed. He then specifically mentioned the name Steve Karsay. The Yankees had signed the big right-hander to a four-year $21 million free agent contract after the 2001 season. Up to that point, the Queens native had pitched for three different big league teams and his best years had been 1999, when he won 10 of 12 decisions for Cleveland and the following season, when he saved 20 games for the Indians.

At first, Karsay looked like a great investment for New York. He was a workhorse for Joe Torre during the 2002 season, appearing in 78 games, winning six of ten decisions and even stepping in to save 12 games when Mo Rivera went on the DL that year. But all those innings took a toll and Karsay needed back surgery that November. Unable to work out during the off season, he reported to spring training with his arm out of shape and injured his shoulder. He made a total of thirteen appearances for the Yankees during the next three seasons earning about $1.2 million for every inning he pitched. The Yankees finally released him in May of 2005 and after trials with the Rangers and the A’s, Karsay hung up his glove for good after the 2006 season.