Last September, the Yankee front office was about to announce that Derek Jeter’s frustrating 2013 season was over. Before they did, they acquired another big league shortstop by the name of Brendan Ryan. At the time of the announcement, I had never heard of Ryan, which was odd because he had been the starting shortstop for both the Cardinals and Mariners for two seasons each.

Unlike Jeter, who was one of baseball’s all-time best-hitting shortstops, Ryan was not a good hitter, averaging just .237 during his almost 700 games in the big leagues. Also unlike Jeter, Ryan was considered one of the very best defensive  shortstops in the game. The Yankees then signed their new acquisition to a two-year contract for $4 million.

I was a bit puzzled by the contract until the Yankees went on their free agent signing spree during the offseason and reloaded their offense with Jacoby Ellsbury, Brian McCann and Carlos Beltran. So even if Jeter could not make it back in 2014, the rejuvenated Yankee lineup could score runs without his offense and by using Ryan at short, they could prevent more runs on defense. It seemed a sound strategy.

Ironically, as we approach the end of the first month of the 2014 season, it is Ryan who is on the DL and unable to play, while Jeter looks like he will do just fine in this final year of his brilliant playing career.

Ryan was born in Los Angeles on this date in 1982 and was selected by the Cardinals in the 7th round of the  2003 draft. He bats and throws right-handed and can play second and third in addition to short. He shares his birthday with this former Yankee infielder and  this pacifist WWII era pitcher. 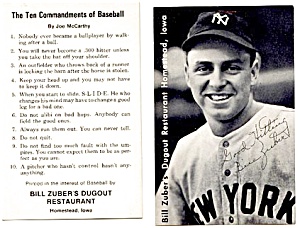 Whatever happened to the bullpen cars and golf carts that Major League teams use to use to transport relief pitchers from the home team’s bullpen to the pitching mound? The Yankees had a pinstriped Datsun making this trip for quite a while. I remember thinking how unneighborly it was to force the opposing team’s relievers to walk from their pen to the mound while providing air conditioned transport to the homie’s. Did the occupants of the car listen to the radio during these rides? What did the conversation between driver and pitcher consist of? You’d think teams would have been smart enough to have their bullpen coaches drive these vehicles so they could spend those last precious few moments discussing the best pitching strategies for the passenger to use with the hitters he was about to face. How many times did we see anxious relief pitchers waiting for their ride to show up alongside the bullpen? Where was the vehicle, out getting gas?

Today’s Pinstripe Birthday celebrant causes me to ponder an even more important historical question about the New York franchise’s use of bullpen vehicles. Bill Zuber became a Yankee pitcher in 1943, just as the exodus of Major League players to wartime service was peaking. The deal that brought this native of Iowa to the Bronx was decidedly one-sided. New York gave the Senators a very good second baseman named Jerry Priddy and a promising young pitcher named Milo Candini in exchange for Zuber and both had very strong first years for Washington in 1943.

Perhaps New York’s motivation for the deal was their certainty that their new acquisition would be around to pitch despite the conflicts going on in Europe and the Pacific at the time. The Yankees knew they could depend on having Zuber on their roster through the War’s end because he was a member of a religious group known as The Amana Church Society. Members of this group were against all wars and were granted conscientious objector status by the US Government. This Society also believed that it was a sin to make use of modern machinery like automobiles. So what would have happened if back in 1943, ’44 or ’45, when Zuber was putting together an 18-23 record for Joe McCarthy’s wartime Yankees as a starter and reliever, the Skipper summoned this big peace-loving right hander from the bullpen to pitch in a game and the Yankees were making use of a bullpen vehicle? Would Zuber have put himself in the passenger seat or would he instead have pointed to the sky, like Bobby Abreu used to do every time he got a base hit and proceed to walk the walk?

In any event, as you can see from the graphic accompanying this post, Zuber went into the restaurant business after his baseball career ended. He found away to merge his new business, his Yankee past and his religiosity by adorning the back page of his restaurant’s menu with his former Yankee Manager’s “Ten Commandments of Baseball.”

Also born on March 26th is this former Yankee infielder and this current day Yankee shortstop.

It was the day before Independence Day in 2007 and the Yankees were hammering the Twins 8-0 in a night game at the old Yankee Stadium. Chien-Ming Wang had started the game and pitched shutout ball for seven innings before Joe Torre pulled him and let Scott Proctor start the eighth. Proctor kept the Twins scoreless that inning and Torre picked the mop-up top of the ninth of that contest to debut the Yankees newest relief pitcher. His name was Edwar Ramirez. I remember when I first saw the spelling, I thought someone had forgotten the second “d” in his first name. I remember when I first saw Edwar, that someone had forgotten to feed him. He was six feet three inches tall and when the television camera got an angle of him standing sideways on the mound, he just about disappeared. This guy was skinny.

His pitches must have looked just as skinny on that evening of his Yankee debut, because in that bottom of the ninth inning against Minnesota, Ramirez struck out all three hitters he faced. Michael Cuddyer, Justin Morneau and Lew Ford all went down swinging at third strikes. As you can imagine, that performance caused a bit of a buzz in the Stadium’s stands and press box that evening and suddenly, all eyes were on Ramirez.

His best pitch was his change up and he threw a very good one. The problem was he had a tough time throwing his fastball for strikes so he tended to throw lots of change ups. The problem with that is the change up is most effective when hitters don’t expect it. Opposing teams simply started waiting for Edwar’s change up. Just two weeks after his impressive debut, Torre brought in Ramirez with the Yankees behind Tampa Bay 4-0, with two outs and a man on second and when he left there was still two outs, the score was now 9-0 and there were two more Rays still on base. After that game, the bewildered rookie was found crying in front of his locker.

Mariano Rivera was a huge help to Ramirez at this time. When he was sent back down to the minors, The Sand Man urged him to work on getting control of his fastball and that’s exactly what the kid did. He was a different pitcher at the beginning of the 2008 season for new Yankee Manager, Joe Girardi. In his first 13 appearances he had 15 strikeouts in 13.5 innings and did not give up a single earned run. He couldn’t keep up that pace but the 2008 season would be the best of his career. He appeared in 55 games, won five of his six decisions and finished with an ERA of 3.90. But after that strong start to his year, you could see his control problems reappear and it got to a point late in the 2008 season that you didn’t know what to expect from Ramirez when he was put into a game.

He struggled mightily to regain his form in 2009 but this time a return trip to the minors did not help. The Yankees gave up on him in March of 2010 and sold him to Oakland. The A’s released him following the 2010 season. In 2011, Ramirez was pitching in the Mexican league. He shares his March 28th birthday with this great post WWII Yankee starting pitcher and this other former Yankee reliever.