Back in the first part of the twentieth century, managerial changes were pretty much a rarity when it came to Big Apple baseball teams. The Giants had the legendary John McGraw as their skipper for thirty years. For the Yankees, it was Miller Huggins from 1918 until 1929 and it took the death of “Hug” for the Yankees to make a change. In Brooklyn, it was “Uncle Robbie.” Before he got the field skipper’s job with Brooklyn, however, today’s Pinstripe Birthday Celebrant had been a very good catcher with the old Baltimore Orioles teams of the 1890’s, when that franchise was part of the original National League. He was sold to the Cardinals in 1900. Just a year later, the new American League was formed and Baltimore was granted a franchise.  Robinson’s old Oriole teammate, John McGraw was named manager and he convinced Wilbert to return to Baltimore and play for the new team. The catcher did so but when McGraw was later suspended by AL President Ban Johnson, he left the league and took a job as the manager of the New York Giants. Robinson then became the Orioles’ player Manager in 1902. The Orioles finished 24-57 that season prompting Wilbert to accept McGraw’s invitation to become the Giant pitching coach, a job he held for over a decade. That same season, the Orioles AL franchise was relocated to New York and became the Highlanders.

In 1914, Brooklyn hired Robinson to replace Bill Dahlen as Dodger skipper. He stayed in that job for eighteen seasons and helped bring respectability to a franchise that had pretty much become a laughing stock for its ineptness. Under Robinson, Brooklyn won the NL pennant in both 1916 and 1920 and he compiled a 1,375 – 1,341 career record. He shares his birthday with this long-ago Yankee outfielder and this former Yankee reliever who also played in pinstripes.

I had always thought that May 15th was one of the few calendar dates on which no member of the all-time Yankee family was born. Then on May 14, 2012, I was poking around the fantastic Baseball-Reference Web site, I came across a guy by the name of Charles Brittingham Burns. In 1902, the legendary skipper John McGraw, who had not yet become legendary, was managing  the Baltimore Orioles, who had not yet been relocated to New York City, where the team was renamed first the Highlanders and then the Yankees. For some reason, in some game, McGraw looked down his Orioles’ bench and pointed at Mr. Burns and told him to grab a bat because he was going to hit. The 23-year-old native of Bayview, MD, who was supposedly known as “C.B.” to his teammates went to the plate for the first time in his big league career and hit a single.

That would turn out to be the one and only time McGraw or evidently any other manager asked C.B. to take an at bat in a baseball game, which means he ended his big league career with a perfect 1.000 batting average. Since then, he has been joined by four other players who batted a perfect 1.000 during their Yankee careers. They are; Heinie Odom (1925) Mickey Witek (1949) Larry Gowell (1972) and the most recent, Chris Latham (2003). Gowell is the only pitcher to do it and Latham is the only one of the five to do it with more than one official at bat. He went 2-2 during his very brief Yankee career. Burns is one of 302 Maryland natives to play in the big leagues. My all-time top five Maryland-born Yankees would be: Babe Ruth – Baltimore; Frank “Home Run” Baker – Trappe; Mark Teixeira – Annapolis; Charlie Keller – Middletown; and Tommy Byrne – Baltimore.

This since departed Yankee infielder  celebrated his 26th birthday by joining Burns as a May 15th-born member of the Yankees’ all-time roster on May 15, 2013. 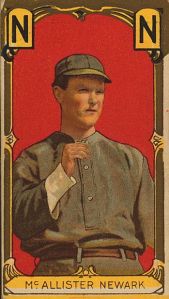 The Yankee (more accurately the pre 1903 Baltimore Oriole) career of today’s Pinstripe Birthday Celebrant was very brief and very insignificant but the story of how Sport McAllister’s name got on the all-time Yankee franchise roster in the first place is pretty interesting. He was born Lewis McAllister in Austin, Mississippi in 1874. He made his big league debut with the old Cleveland Spiders franchise in 1896. He therefore had the misfortune of being a starting outfielder on the 1899 Spiders’ team that is pretty universally considered to be the worst big league team in the history of the game. That season, the Spiders finished with a 20 – 134 record that left them 84 games behind first place Brooklyn. They drew fewer than 7,000 fans to their home games that year and literally played their way out of existence. When the NL decided to contract from 12 teams to 10 the following season, the Spiders were everyone’s first choice to get the heave ho.

As for McAllister, he did not distinguish himself at the plate during his four years with Cleveland, averaging only .232. He did, however, build a reputation for being able to adequately play just about any position on the field, except pitcher. It was most likely that flexibility that got him a tryout and a contract with the Detroit Tiger team in the brand new American League in 1901 and old Sport had the season of his life. Not only did he play five different positions for his new team that year, he also averaged .301 in ninety games of action and it looked like the then 26-year-old switch-hitter was on his way to stardom. That never happened.

When the 1902 season began, there was trouble brewing in Baltimore. John McGraw had been enticed back to that city to manage its AL franchise by offering him ownership stock in the ball club. The problem was that Ban Johnson, the guy who put the American League together in the first place, owned a controlling share of stock in the team and McGraw absolutely despised Johnson. So McGraw decided to jump to the NL’s New York Giants in June of the 1902 season, but not before he put the screws to Johnson. Lil Napoleon owned a saloon in Baltimore with Wilbert Robinson, one of his Oriole players and also an Orioles’ stockholder. McGraw sold his half of the saloon to Robinson in return for his stock in the ball club. He then sold all his shares to his buddy, the Orioles’ club president who then became a majority stock holder in the club, effectively eliminating Johnson from having any say in the franchise’s operations. The Baltimore team president then turned around and sold his controlling interest in the Orioles to two men. One was Andrew Freeman, who was McGraw’s new boss as the owner of the Giants and John Brush, who was the owner of the NL’s Cincinnati Reds. The two men then proceeded to rape the Orioles roster by reassigning most of the Baltimore players to their respective NL clubs, leaving the team with just seven guys. In an effort to salvage the season and the new league, Johnson convinced all the other AL owners to provide the Orioles with replacement players from their own rosters.

Sport McAllister had started the 1903 season terribly. He got into a collision with a teammate and hurt his knee and the nagging injury had had an impact on his entire game. He was averaging just .209 when Johnson’s request for replacement players reached the Tiger front office. Somebody in that office decided to give the Orioles McAllister. So that’s how and why Sport McAllister became a member of the Yankee franchise’s all-time roster for just three games during the 1902 season. His time with the team only lasted that long because somebody else in the Detroit front office evidently realized that it was a mistake to give up one of the team’s better players, injured or not and had demanded the Orioles return him, which they did. McAllister played just one more season for Detroit before accepting head coach’s position with the University of Michigan’s baseball team. He lived until 1962. I found most of the information for this post in this article about McAllister, published by the Society for American Baseball Research.

Sport shares his birthday with this former Yankee pitcher and this one too.